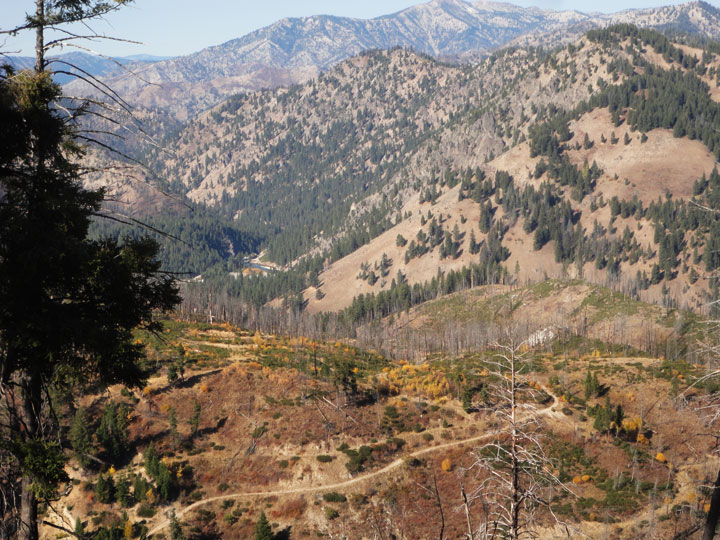 The Atlanta Gold project lies within the historic Middle Boise Mining District in an area with a long history of exploration, development and production of gold and silver ore since a discovery in 1863. The project site is located on Atlanta Hill, which rises approximately 579 metres (1,900 feet) above the town of Atlanta, Idaho, at an elevation of 2,195 metres (7,200 feet) above mean sea level.

Historic gold production from Atlanta of 297,000 ounces of gold and 2.6 million ounces of silver (47,000 equivalent ounces of gold) or 344,000 equivalent (Au +Ag) ounces of gold was shallow high grade mining from surface to a vertical depth of 610 metres (1,000 feet) below surface. Most of this was mined at gold prices of US$20 to $35 per ounce above cut-off grades of 17.1 grams per tonne (0.5 ounces per ton) up to and including 1935 and 13.7 gpt (0.4 opt) thereafter. Consequently, most of the resources along the Atlanta Shear Zone were not mined and remain in situ.

The Atlanta property was previously being considered for bulk mining with a cyanide heap leach operation and large open pits. Two areas were defined to be mineable by open pit methods. These were the Monarch area in the eastern portion of the property and the Idaho area in the western portion. There is also a third area named the East Extension area, lying immediately east of the Monarch, which was considered a high probability as a third pit.

However in early 2008, the Company changed the mining strategy for Atlanta, from bulk mining and cyanide heap leaching, to a combined shallow open-pit and underground operation with an on-site milling facility and no cyanide circuit. This new mining strategy will produce both a gravity concentrate and a precious metal rich sulphide concentrate to be custom smelted. It will also reduce the environmental footprint by 85% and increase expected metal recovery rates from 63% to 90%. Each of these improvements is critical to the future sustainable development of the Atlanta Gold mine.

This more selective method of ore extraction positively addresses environmental concerns identified during previous permitting efforts. Management is confident that by working closely with environmental groups, the town of Atlanta and surrounding communities, federal, state and local agencies as well as other stakeholders, it will be successful in obtaining the regulatory approvals necessary to develop combined shallow pits and an underground mine at Atlanta in a timely manner.

According to the United States Census Bureau, the county has a total area of 3,101 square miles (8,030 km²), of which, 7,971 square kilometres (3,078 square miles) is land and 59 square kilometres (23 square miles) is water. Elmore County’s highest point is Snowyside Peak at 3,246 metres (10,651 feet) above sea level, located in the northeast corner of the county in the Sawtooth Wilderness. The lowest elevation in the county is the Snake River in the southwest corner, at less than 762 metres (2,500 feet).